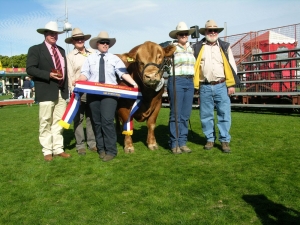 Midas Gelbvieh has had a great time at the Ekka in 2012 taking 3 broad ribbons with all three animals shown -- first it was Midas Windlass G005 who won her class 16-20 months and then was crowned the Junior Heifer Champion.